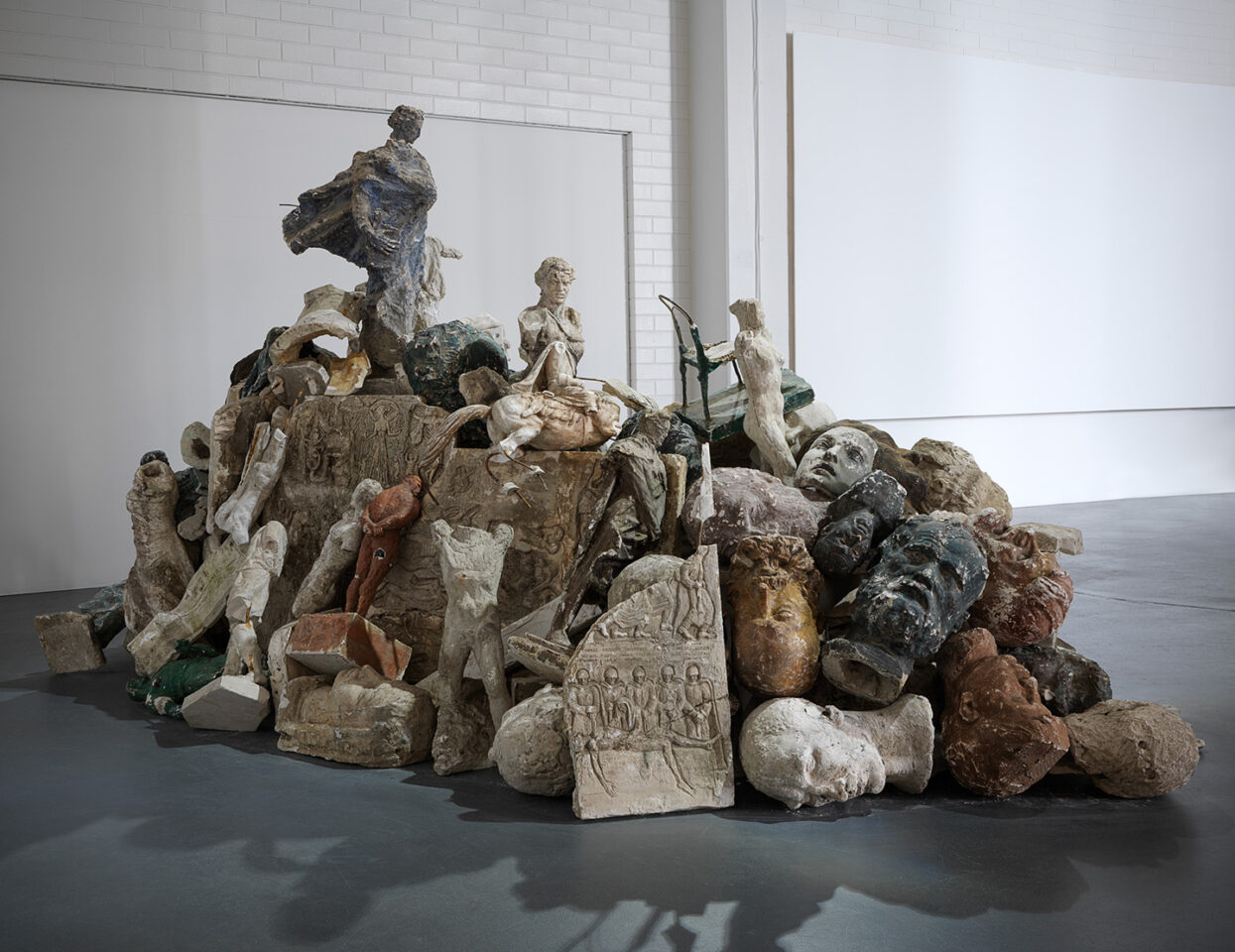 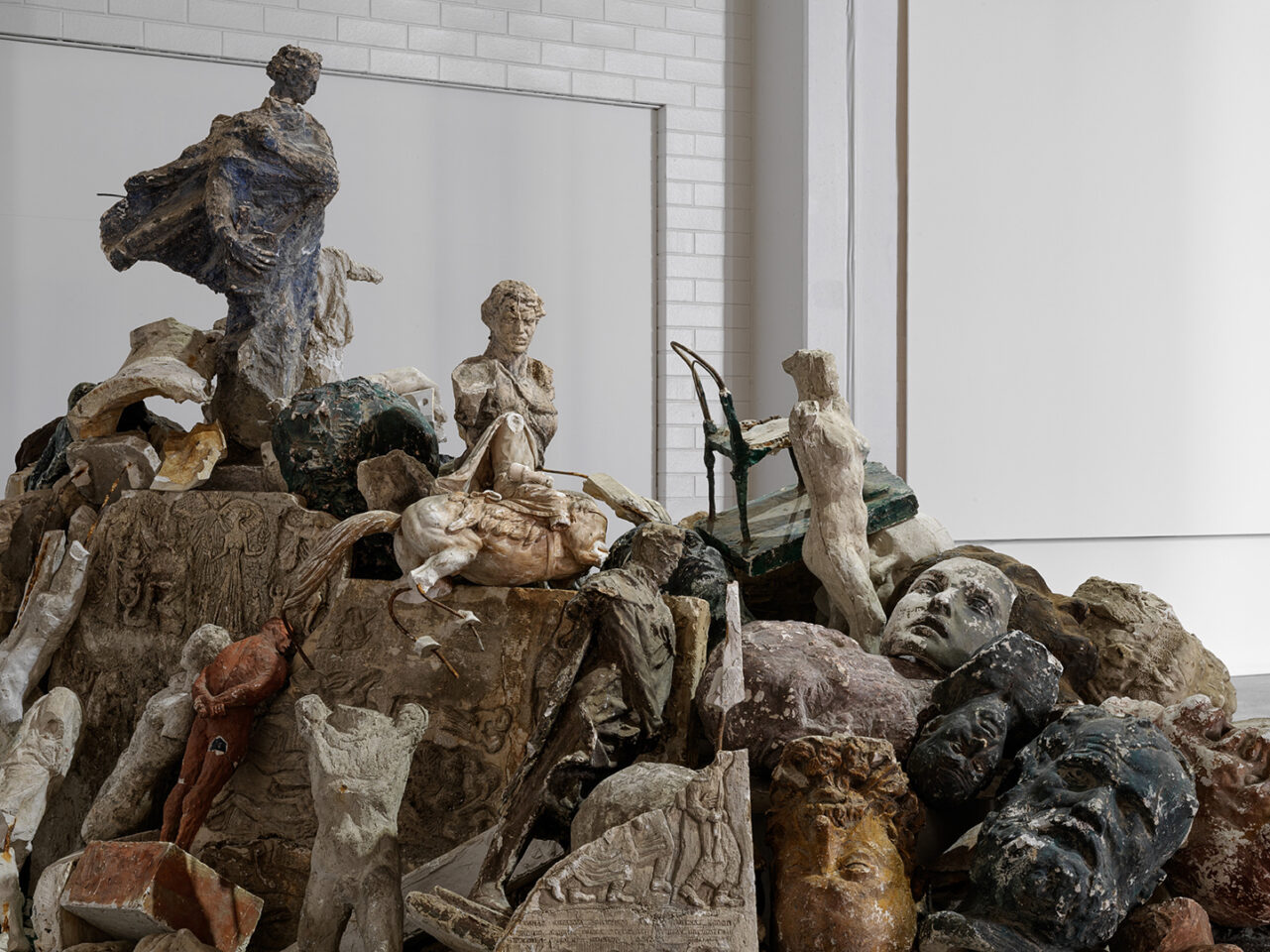 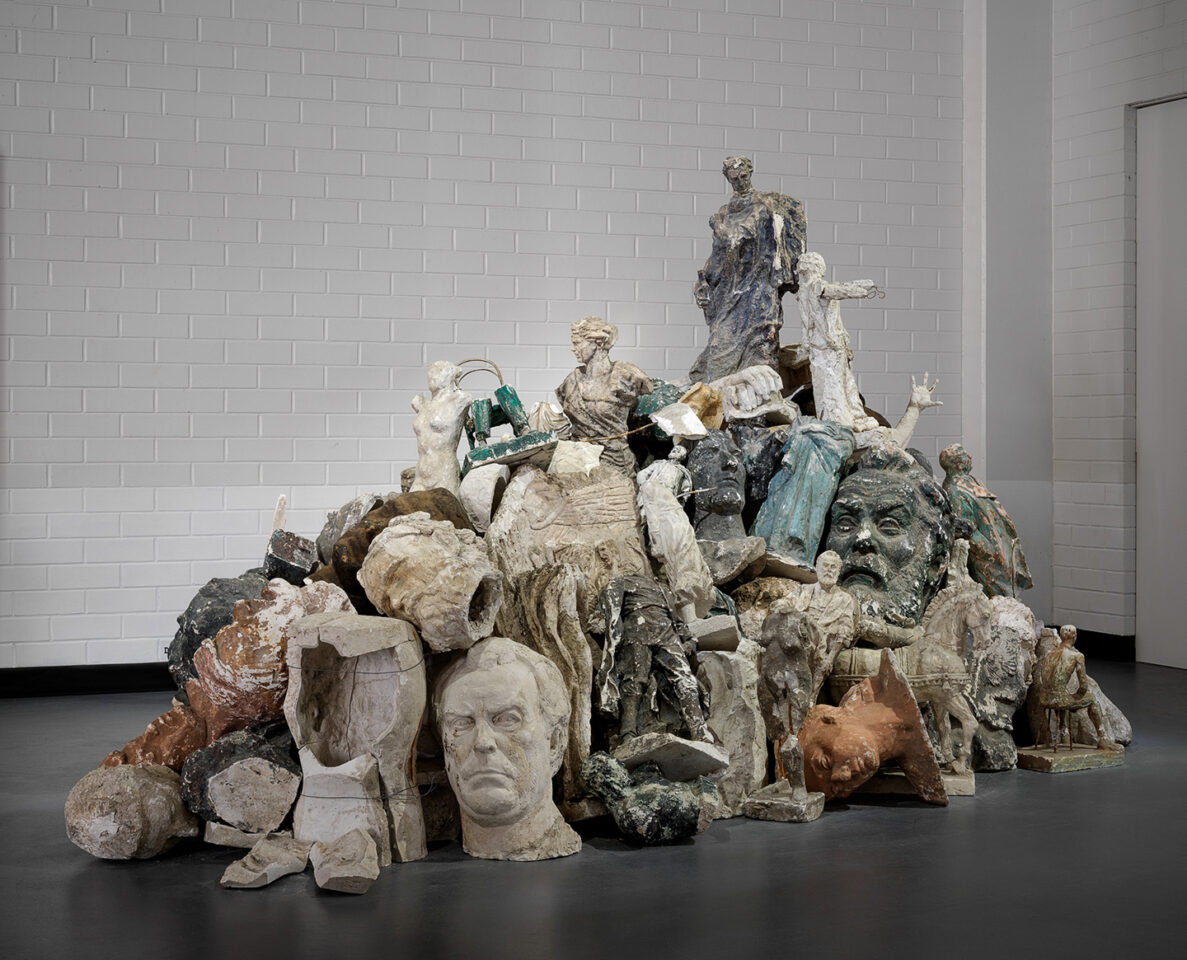 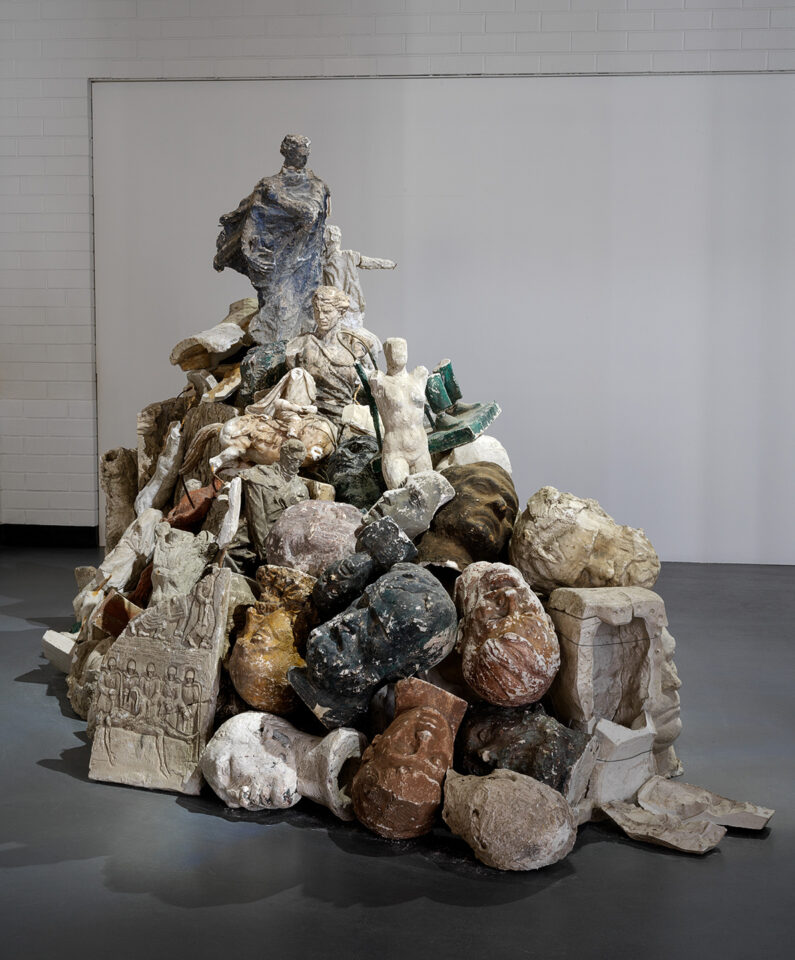 This installation was exhibited at the Institute of Modern Art in Brisbane as part of The Churchie Emerging Art Prize 2021.
9 October – 18 December 2021
Virtual tour of the exhibition here: https://openhouse.littlehinges.com.au/v2/institute-of-modern-art-420-brunswick-street

Nina Sanadze is a winner of Churchie Emerging Art Prize 2021.
The guest judge Rhana Devenport (ONZM), director of the Art Gallery of South Australia) said at the announcement of the award:

“Drawing on her own familial history in Georgia (former USSR), Nina Sanadze is compelled to respond to some of the great forces of our time – ideology, authority, monuments, conflict and survival – amidst the transient yet insistent fabric of memory, beauty and tenderness. Evocative and dramatic, Nina eschews the once victorious into a tumbling morphic vortex of fragility.

She writes: ‘A sense of urgency to respond to and grapple with a myriad of contemporary socio-political and personal developments drive my creative practice. … Humour and beauty allow me to address often disturbing concerns, reflecting the complex paradigm of our existence, which is simultaneously sublime and horrific.’

Made possible by a fascinating personal connection, the installation is constructed from the surviving studio archive of a prominent soviet monumental sculptor, Valentin Topuridze (1907-1980), whose public sculptures were torn down in 1989 with the fall of the Soviet regime. In this work plaster models, moulds and fragments are rescued and accumulated to form unexpected conversations as limbs, bodies, horses and uniforms entwine in a tumbling concatenation of loss and hope. In another layer of complexity, the installation is inspired by the much reproduced 19th century painting The Apotheosis of War 1871 by Russian war artist Vasily Vereshchagin, itself a stark commentary on humanity’s potential and ideological viewpoints.

Nina possesses a powerful ability to draw on the political, the familial and the poetic with great clarity and aesthetic poignancy.”

Apotheosis is an ongoing iteration of 100 Years After and 30 Years On, an installation originally presented at the 3rd Tbilisi Triennial (Georgia) in 2018, as well as Monumental Shift exhibited at the VCA, Melbourne in 2019. The installation is constructed from the surviving studio archive of a prominent soviet monumental sculptor, Valentin Topuridze (1907-1980), whose public sculptures were torn down in 1989 with the fall of the Soviet regime.

Displaced, disembodied, de-contextualised and piled together like corpses, the sculptural archive forms a different kind of monument, a memorial. The unexpected interactions between individual sculptures create random, evocative and dramatic compositions. Once monumental and victorious, they now appear fragile and insignificant, alluding to the impermanence of every political era and ideology. The installation re-materialises and re-examines an erased visual history, its unorthodox and seemingly violent arrangement prompting us to consider its ongoing sociological value.

The installation is inspired by 19th century painting The Apotheosis of War by Russian war artist Vasily Vereshchagin.
.
Related reading:
Portfolio, Nina Sanadze: RACAR_46_2_digital_03_sanadze_portfolio
Published at the Journal of the Universities Art Association of Canada (UAAC), Issue 46, no. 2 (Fall 2021)
“Revised Commemoration” in Public Art: What Future for the Monument?
.

The Image is not Nothing (Concrete Archives) premiered at ACE Open as part of the 2021 Adelaide Festival program.
It was also exhibited across two venues in Melbourne in May-June 2021: Melbourne’s Living Museum of the West and Margaret Lawrence Gallery

The Image is not Nothing (Concrete Archives) is an exhibition that explores the ways in which acts of nuclear trauma, Indigenous genocide and cultural erasure have been memorialised by artists and others. It comes as the result of research by curators Lisa Radford and Yhonnie Scarce whose fieldwork has encompassed sites of significance including Auschwitz, Chernobyl, Fukushima, Hiroshima, Maralinga, New York, Wounded Knee and former Yugoslavia.

In the wake of the historic devastations that have occurred at these sites, architecture (brutalist buildings, monuments and memorials) and imagery (photographs, diarised accounts) remain an archive of human history and loss scattered across the globe. They are the physicality of immeasurable atrocities and attempts at representing the intangible. When acts of genocide that have occurred in Australia since colonisation are routinely overlooked or disregarded, The Image is not Nothing (Concrete Archives) ultimately looks here and elsewhere in order to grapple with traumas that Australia as a nation has not processed.

The exhibition presents new and existing work in a range of material forms by emerging and established artists from the lands that make up Australia and abroad. It will be accompanied by the launch of a special edition archive (complementing the pre-existing online archive published in Art + Australia) and exhibition catalogue (featuring essays by Yankunytjatjara Anangu woman Karina Lester and Azza Zein), designed and published by Person Books and available to purchase.

Nina Sanadze’s artist talk at the Victorian College of the Arts, Art Forum series in regards to Apotheosis installation (13 May 2021).